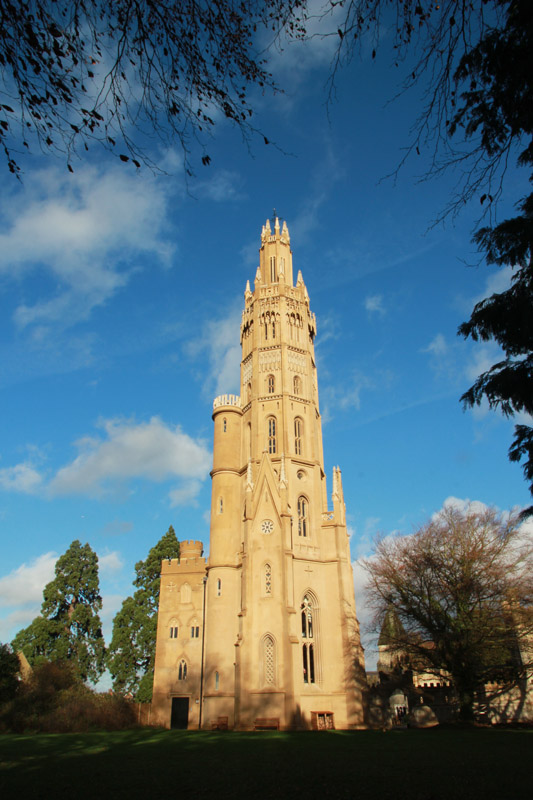 Lord Horatio writes: “Enthused by my nephew Simon’s description of the newly restored Hadlow Tower in Kent, I fully intend paying a visit with Lady Dawdle once time and tide allow.

Pictured here in a magic lantern slide show, it was built in the late 1830s by the wealthy son of a yeoman farmer, Walter May, in what has become known as “Strawberry Gothic.” This refers to an ornate style promoted by Hugh Walpole who built Strawberry Hill in Twickenham.

The house has been exquisitely restored by the Vivat Trust  http://www.vivat.org.uk/ and boasts three bedrooms and even a lift, although this doesn’t take you to the top of the 175ft tower. To get to the viewing balcony they have constructed a magnificent spiral staircase made of steel which cleverly holds the tower together too. From the outside it looks very Harry Potter.

While there are no owls to deliver your postcards, the tower does boast a pair of rare peregrine falcons, which can be seen swooping over the countryside and bagging the odd pigeon.

Lord Horatio writes: “While stoking our giant November 5th bonfire with timber felled by Hurricane Jude I saw the light, so to speak. It dawned on me that some of the stouter branches could be used to make a treehouse or two for the grounds of The Hall. Boyhood memories of makeshift eyries blended seemlessly into visions of watching the sun go down, drink in hand, from the balcony of a dream chalet in the sky.

Before tackling my “man in the know” Barry Walters http://www.goldstoneservices.co.uk/gallery.html, I had a look at what is being whittled into shape around the world. Depending on your budget the choice is staggering. Top of my chart for innovation is the wonderful “Stealth” mirror cube , wrapped round a tree in the heart of a Swedish forest. Despite weighing in at around five tons it reflects the surrounding woodland and thus, like a magician’s illusion, seems to disappear. 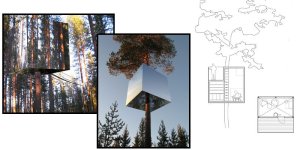 Ah, I hear you say, what of the unsuspecting birds flitting from bough to bough? Well the clever folk at architects Tham and Videgard http://www.tvark.se have put transparent ultra-violet layers in the mirrors so the wildlife can “see” the cube. The invisible retreat is not the only big surprise commissioned by the visionaries at Treehotel. Among the trees in Harads, there is also a giant birds nest and a flying saucer to snuggle up in too. Do have a look at the http://vimeo.com/51741638 and www.treehotel.se

Other favourites are a series of lovely wooden structures based on winged maple seed pods and planned by architects Farrow Partnership http://www.farrowpartnership.com/commercial-a-residential/eterra-samara-resort for trees in the E’Terra Samara Resort, Tobermory, Ontario, Canada http://www.eterra.ca/destination/tobermory/They seem to float serenely on air. Magical!” 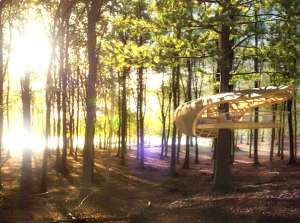 Lord Horatio writes: “We have recently returned from a wonderful weekend on the border between England and Scotland, courtesy of a distant cousin. The occasion was a reunion of The Hume (or Home) Clan Association, which takes place every five years in and around picturesque Berwick-upon-Tweed.

This independently minded town has been regularly used as a political shuttlecock by the English and the Scots. It was batted backward and forward across the border some 12 times in 400 years, before finally coming to rest in Northumberland.

One amusing tale is that the town acquired such a separate identity over the years that royal proclamations had to refer to “England, Scotland and the town of Berwick-upon-Tweed.” There was even a suggestion that the town was still at war with Russia after the Crimean conflict because the peace treaty in 1856 didn’t mention it by name.

A wonderful tour of the surrounding countryside and various stately piles, complete with suitably blood curdling tales, brought us eventually to The Hirsel, seat of the 15th Earl of Home, son of former Prime Minister Sir Alec Douglas-Home, for the AGM.

Lord Douglas-Home, chairman of the Queen’s bankers Coutts, and his charming wife Jane treated us all like royalty with a splendid lunch and, to everyone’s delight, a pipe band on the front lawn. During an entertaining speech to the AGM David reminded the gathering of the deadly clan rivalries that existed in years gone by.

He recounted how one of his ancestors invited some troublesome neighbours to dinner. When they arrived they were asked if they would like to freshen up and were escorted through the dining room, thrown down some stairs and murdered.

When the clan chief wrote to complain about the treatment of his kin folk, the then Earl of Home replied that it was their own fault as they should have noticed as they passed through the dining room the table was only laid for two people!

With a nod to the current debate about Scottish independence the treasurer, Charles Hume, noted that plastered on the back of the Welcome To Scotland sign that greeted him as he arrived, was a poster with the words Home Rule. How appropriate!