Up-up and away! The Airlander.

As things are looking up…….so am I! Instead of using wind skittled timber from the estate to build a ship to sail the high seas I am now inclined to use this valuable resource to build a king sized home for a ship of the skies.

Plans are well under way to construct a giant wooden hangar alongside the Dawdle Hall deer park. It is fair to say that over the past few weeks I have seen the light ..or lighter than air to be precise. The cavernous space will be big enough to house the Lord Horatio, a majestic blimp. From this safe haven Lady Winifred and I will sally forth to relive the airship adventures of yesteryear.

Not since the thirties, when giant Zeppellins ruled the skies, has the moment been more opportune to step on the gas and head for cloud nine. Imagine cruising sedately over the countryside, feet up, drink in hand, safe in the knowledge you are a lot quieter and creating a lot less pollution than the average jet liner. Yes, I am very taken with the new generation of dirigibles.

Some clever chaps at Hybrid Air Vehiclesfrom Cranfield near Milton Keynes have come up with a futuristic looking craft called the Airlander, pictured above, which might be just the ticket. It’s very hi-tec. The “balloon” is made of laminated fabric and filled with helium, which doesn’t catch fire. They are currently working on a big version that can carry a staggering 200 tons, stay aloft for days on end and land almost anywhere.

I must admit the thought of avoiding the nightmare of modern airports is very appealing.  Another group, based in America called Aeroscraft  have come up with a rigid helium airship, similar to the picture below, with a frame made of aluminium and carbon fibre which will eventually carry up to 500 tons and opens the door to the idea of giant floating hotels gently circumnavigating the globe. It could give a whole new dimension to the world cruise. 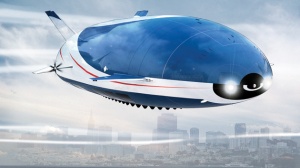 The idea of airships took a nosedive after the mighty Hindenberg caught fire so spectacularly in 1937, but the cost of fuel, lack of landing space and the need for more efficient workhorses than helicopters means that things are looking up. Lighter than air craft are now looked on favourably by the military, scientists and by companies who need to ferry heavy equipment to and from remote and difficult sites in environmentally sensitive parts of the planet. 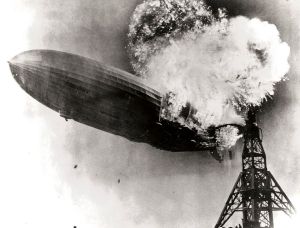 According to an old pal of mine in the know they even used an airship to drop big rubber rafts on top of the rainforest canopy in South America so boffins could study the wildlife from the treetops without having to trek miles through the jungle. The only flies in the ointment are convincing a wary Lady Winifred to step aboard and preventing Whimsy, my faithful hound, from trying to sink his teeth into the “balloon” with disastrous results.

He does love a challenge and has deflated almost every ball that has crossed his path. It’s not a puncture I fear, rather the prospect of the plucky Spaniel being carried aloft with jaws firmly embedded! While his ears always flap wildly in the wind, I doubt they will give him enough lift to land safely. I think a small crash helmet and doggiechute might be in order.