Having spent a soggy morning with a team of burly yeomen dragging fallen trees out of the recently expanded lake, I settled down with a glass of “old mainbrace splicer” to ponder my next move. Four glugs of my favourite tincture later it hit me like a mallet. I could caulk two planks with one wad, so as to speak. The answer was simple. Build a gigantic ark!

What was good enough for old Noah………… With one fell swoop I could get rid of all the timber blown down by the gales and do my bit for the coming armageddon caused by global warming. By renting out cabins I could cover the construction costs and, who knows, perhaps have enough money left over to fix the leaky Dawdle Hall roof.

Two glasses later I was inspired and sketching designs on the back of the latest missive from Her Majesty’s Revenue and Customs. It was then that it hit me, not like a mallet this time, but a flourescent red juggling club dropped onto my slippers by my faithful Spaniel Whimsy.

Bemused I attempted to pick it up, but he was too quick and shot out of the door and down the hall. A mixture of curiosity and dread sent me off in hot pursuit. As we neared the ballroom I could hear a strange clattering followed by cussing from within. What could this be?

There in the middle of the floor, thankfully not under the chandelier, was my oddball nephew Simon attempting, with a varying degree of success, to launch a succession of lurid looking juggling clubs into the air. The resulting blizzard of batons rouge was mesmerising.

I had no idea he possessed such a talent and during a break in proceedings he revealed he had just got back from Chocfest 2014. With a flourish he produced his mobile phone and bid me watch a grainy video (see above), which seemed to encapsulate the spirit of the occasion admirably.

Apparently every year there is a juggling convention held in York where participants who bake a chocolate cake get in for a reduced admission. How this had been going for almost 20 years without me being aware is one of life’s great mysteries. it attracts some of the finest ring, ball, hat, club, poi, staff and other object manipulators from around the globe.

At the end of the day the cakes are judged, prizes awarded and the results eagerly devoured by the crowd, hungry after a day of dazzling displays of manual dexterity. See the recipe for the winning cake at http://www.bbc.co.uk/food/recipes/chocolate_brownie_64092

Warming to the theme Simon has added his favourite video clips via links in the Ballroom. https://dawdleandwhimsy.com/about/the-ballroom/ . I strongly recommend you have a look. I mean to say, nine clubs in one go. Just Incredible! 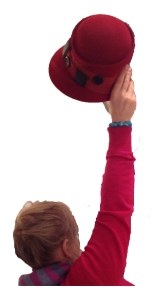 This weeks Hats Off to: German artist Jan Vormann who never travels without a suitcase full of lego. Whenever he finds a crack in a wall he repairs it using a multitude of the little multicoloured bricks.

Also an Icelandic “Elf-help” group. They have joined forces with environmentalists to protest about a road plan due to go ahead near Reykjavik. Fears that the “little people” might be disturbed have helped halt the scheme until the Supreme Court looks at the case.

And to Sue Webster and Tim Noble from Britain who have made a woodland chess set. The board is carved out of a tree stump and the pieces are modelled on their collection of mummified animals, cast in bronze.

Not to mention the developer who has built an English village outside Shanghai complete with red telephone boxes and mock Tudor houses. There is also a cafe in the Chinese city dedicated to Sherlock Holmes.

And finally those clever clogs at Imperial College, London, for coming up with clothes for old folk that harden up when they fall over protecting their limbs and joints. It’s apparently all down to something called Armourgel which toughens on impact. Hoorah!